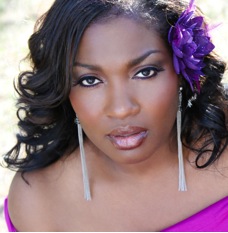 Born on Valentine’s Day, this Arizona-born songstress, songwriter & producer had sounds of soul music flowing through her veins at an early age. While voice training in those days started at her grandmother’s church, her professional singing career began as a child when she was chosen to sing background vocals for the legendary Jeffrey Osborne, and for the Rock Band Yes. The former beauty pageant winner decided long ago that music was her true passion and has set her sights on her dream ever since.  While studying classical voice at Howard University, Tobin gained stage experiences performing with the school’s Chorale in which during President Clinton’s Inaugural Gala on the National Mall, performing background for Diana Ross, Whitley Phipps, and shared the stage with Patti LaBelle, Luther Vandross, Shai and many others.  Having performed demos and background vocals for artists such as Joe, Chico DeBarge, Coolio, Chante Moore, Korea-based Uptown, Coco Lee and Mica Paris has prepared her for her moment to shine as a solo artist.  Although most of her influences are male singers like Stevie Wonder, Luther Vandross, Marvin Gaye, Prince, and Donny Hathaway, Tobin is reminiscent of the sultry sounds and richness of R&B or Jazz singers of yesterday. Teri Tobin independently released her critically acclaimed debut LP, LOVE INFINITY, spring 2011. Since then, she has released her first Christmas EP, CHRISTMAS CHILD. Tobin's music can be heard on radio stations worldwide as well as countless podcasts, DirecTV, and on select airlines In-Flight. Her international hit-single "Free" remained at the #1-spot for continuous weeks on various charts in the United Kingdom and The Netherlands. Tobin, SoulTracks 2011 Readers' Choice Awards and Independent Music Awards Nominee, is currently touring select cities in the U.S. with her "Love&Sōl LIVE" concert series which kicked-off at the legendary Roxy Theatre in December. On Valentine's Day 2012, she released the title track and first single "So Good to Me" feat. Morris Alan from her forthcoming sophomore full-length album entitled, SO GOOD TO ME scheduled for release June 2012. Tobin punctuates each line with heart and soul, speaking to every generation with each melodic phrase. Prepare to be touched by her honesty as she expresses her unwavering admiration of her first true love…….music.

Posted by The Indie Review at 9:43 AM