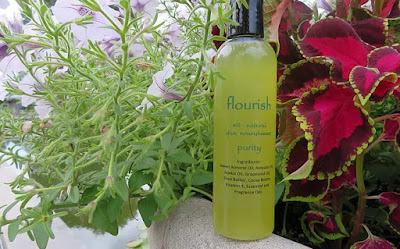 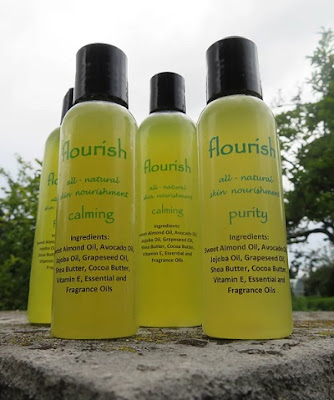 Flourish oils was born out of the desire to develop clean, healthy, pure, natural products which not only make you smell and feel good on the outside, but also help you to nurture your inner-being. Holistic Beauty IS our religion and we are on a constant quest to create products that infuse wellness of mind, body and spirit. At the essence of flourish is a marriage of all the elements that embody what it means to FLOURISH.

Flourish promotes the philosophy that true beauty is a reflection of the internal self. The scented oils were created to not only nourish the skin, but to also compliment the beauty that radiates from within.

Their handcrafted, hand-poured oils contain a handful of all-natural ingredients, such as 100% pure shea butter, sweet almond and jojoba oils, as well as organic essential oils. They do not use synthetic chemicals, chemical preservatives, artificial colors, harsh detergents or any other unhealthy toxins.
Posted by The Indie Review at 12:58 PM No comments: 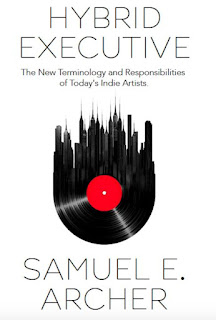 Samuel completed his first book, "Hybrid Executive," [The new Terminology and Responsibilities of today's artists.] In the pages, Samuel expounds on how technology affected various roles in the music industry, what make these roles essential and how these roles interact with each other. Within his discussions of concepts and principles, Samuel also adds his personal experiences, which makes "Hybrid Executive," an exciting and informative read. Samuel considers "Hybrid Executive," a self-empowering manual for today's indie artists.

Hybrid Executive is a terminology and title today’s Indie artists can proudly use to define who they are. In this book, Samuel explains why it’s essential for up and coming artists to be familiar with all sectors of the modern music industry [such as management, artist & repertoire. Production, distribution, marketing, and sales, etc.] combined with understanding how each area interacts with the other.
Samuel has worked with artists and groups such as B2K, Horace Brown, 112, Courtney Fadlin, His Voice, Lovener Walcott, Aquannette Chinnery, Delroy Souden, Miriam Corlette Williams and Nhojj to mention a few. He has contributed music to T.V. shows - Dr. 90210, The Janice Dickinson Modeling Agency, Property Ladder, How Clean Is Your House, Millionaire Matchmaker, and many others. He has also scored for films such as The Lockdown Club, All I Want, Moving In, Blue Suitcase, The Documentary: On The Road to Love Pain & Redemption and more.

Posted by The Indie Review at 3:11 PM No comments: 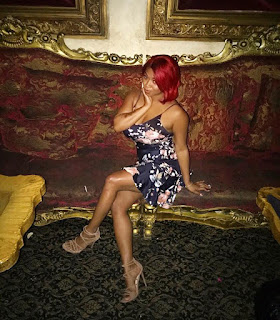 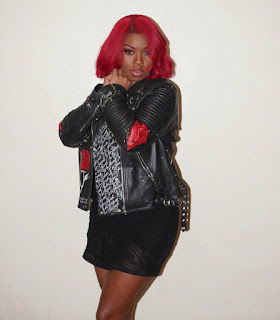 Posted by The Indie Review at 4:52 PM No comments: 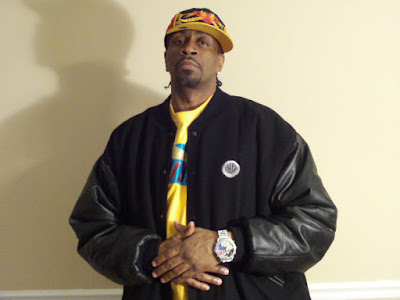 Jaz-O has been a mainstay in the music industry for over 30 years. The Marcy Houses, Brooklyn born and raised rap legend has initiated the careers of Jay-Z, Irv Gotti, Sauce Money, The Lox, Chad Elliott, and Memphis Bleek to name a few. Recalling his first rhyme at the age of 14, he had co-written and produced his first record, "HP Gets Busy" at the age of 21. This song featured his 16 year old “partner in crime”, Jay-Z and friends, Easy LD (E. Ward) and Almond Joy (J. Ward). In 1986 Jaz-O teamed up with music producer Fresh Gordon to create the answer to RUN DMC's "My Adidas" with "My Fila". The young songwriter-MC/producer continued his reign of terror in the streets, destroying challengers in MC battles local and abroad. In 1989 Jaz-O blasted onto the mainstream media with his debut single, "Hawaiian Sophie", and a debut feature on The O'Jays number one single "Have You Had Your Love Today?” Jaz-O was the first rap artist ever signed to EMI Records. He released two albums and an EP from 1989-1991. Along with Prince Paul, The Large Professor, and Mark The 45 King, Jaz produced several records for his projects.  After taking a hiatus in 1992, Jaz-O re-emerged in ‘96 producing the Jay-Z classic "Ain't No Nigga”. Jaz continued his string of production classics for Jay-Z including "In My Lifetime-The Big Jaz Remix", "Rap Game-Crack Game", and featured on Jay-Z cuts "Bring It On" and "Nigga Who? Nigga What?” Producer of the demo that landed The Lox their deal with Bad Boy, Jaz-O has arranged for the likes of Puffy, Rakim, M.O.P., Foxy Brown, Queen Latifah, Kool G Rap and numerous others. But Jaz is most well known for his 'triplet style' of rhyming, which he is majestically titled "The Originator".
Posted by The Indie Review at 12:56 PM 1 comment: 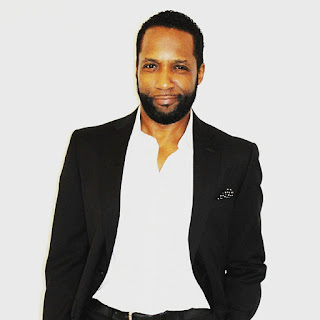 Derrick Muhammad native from Youngstown, Oh, is independent film producer and recently became Vice President of Programming for the all new Jam Network. As a touring stand up comedian Derrick has performed on the college circuit and comedy clubs in the Midwest, Los Angeles and Atlanta. Derrick also starred in the award winning indie suspense thriller; The Buyout,: "American Pimp- Rosebudd and Insecurity.with appearing on television, commercials and theater. In 2017 Derrick Produced, co wrote, directed and co starred with R&B legend Karyn White “Gale & Storm streaming on Amazon Prime worldwide. He has developed several projects in various stages of development for Karyn White Entertainment and his production company Mecca Don Films. Derrick is a visionary filmmaker who mission is to change the negative image of black people globally through film, television, literature, music and comedy.  “ If you do nothing, nothing will happen.” 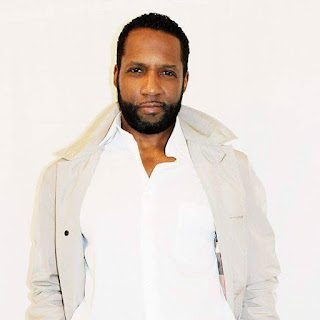 Posted by The Indie Review at 6:37 PM No comments: