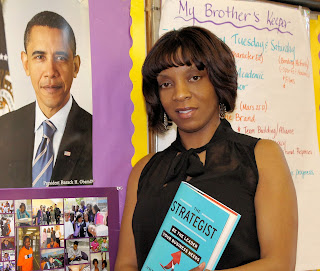 A quality education is the foundation upon which one can construct a strong, possibility-laden future.  Nadia L. Lopez and her cutting edge holistic, well rounded approach to education definitely provide a sturdy foundation for the students who attend her progressive Mott Hall Bridges Academy, a middle school located in the Brownsville section of Brooklyn, NY.
Born and raised in Brooklyn, NY, Lopez had a childhood supported by immigrant parents who made education a top priority, so that Nadia would have the optimal opportunity to succeed in life.  She enjoyed school, and spent most of her time there after her parents separated, even outside of formal class time.  Lopez, who earned a Bachelor of Science degree in Nursing from Wagner College and a Master of Science degree in Special Education from Long Island University, as well as an Advanced Certification in Leadership from Baruch College, had originally planned on a nursing career.  However, after her training, she discovered that nursing wasn't really her passion.  So, after approximately four years toiling at Verizon as an account collections representative, where she learned the art of customer service, she turned her attention to education, spurred on by having had her own child.  Her career change was determined by the fact that she saw several disturbing problems within the New York educational system that her child would be entering.  So, the concerned Lopez, rather than just worry, set her course for creating a new educational model.
Lopez initially worked at a middle school in the Fort Greene section of Brooklyn, teaching the seventh and eighth grades.  She subsequently taught at the Urban Assembly Institute of Math and Science, an all-girls school in downtown Brooklyn.  Then in 2008, she was selected to join the New Leaders for New School, a nationally acclaimed leadership organization, as a Resident Principal within the New York City Department of Education.  After completing that rigorous year-long program, she became an Assistant Principal.
In 2010, Lopez's dream became a reality, when she founded the Mott Hall Bridges Academy, a Brooklyn middle school (grades 6 to 8), which focuses on Science, Technology, Engineering, Art and Math (STEAM).  “Mott Hall” is a series of schools; “Bridges Academy” pays homage to Brooklyn, which links to the other New York boroughs via bridges.  And, Lopez is assisting her students with building their bridges to a brighter future.
A visionary inspired by what the world has to offer, Lopez strives to enhance and enrich the educational experience for the students in her school.  She sees the students as individuals, for whom social and emotional health and support are vital to their ability to learn.  She also encourages their parents to become integral partners in their educational journey.  Innovative and willing to listen, Lopez encourages critical thinking in every facet of their lives with her students, so that they will analyze their possibilities as they learn.
Lopez's open door, family-oriented approach to education is designed to create a supportive culture for the students.  She is setting a new standard, so that her students can begin to think and make wise choices early in life.  They learn how to network and build relationships under the guidance of Lopez and her hand-picked staff.  They become focused individuals who are prepared for life's challenges.
One of Lopez's primary goals is to build literacy, which is an area of struggle for most inner city students.  She'd like to make her school a shining example, rivaling the top schools in the nation.  The Mott Haven Bridges Academy teachers are selected by a committee of current teachers and staff, who already understand what it takes to be on their team.  The candidates also teach a demo class of students, to give the students an opportunity to weigh in on the strengths and weaknesses of the teacher, from their vantage point.
When it's time to graduate to high school, Lopez's students are aided in making an informed decision about their next learning institution.  They research together, with parents included, ask critical questions and receive answers and the visit the high schools, to see and hear first-hand what that particular experience is like.
Lopez's students are armed with substantial skills when they graduate, as her school offers courses in Culinary Arts, Video Production, Sea and Mechanical Robotics and will soon offer Computer Coding, so that students will be able to create their own applications and programs, and be steps ahead of the game.
Lopez, the self-proclaimed “Queen of Networking,” has partnered with various elected officials, corporations, non-profits and individuals in sports and entertainment (such as Black Girls Rock!, TEAM FIRST, Hip Hop Summit Youth Council and the NY Knicks), to empower, expose and motivate her scholars.
Propelled by her desire for positive educational changes, the wind beneath the wings of Nadia L. Lopez is her dream of transforming the lives of children and impacting generations to come, within her Brooklyn community.
Posted by The Indie Review at 8:55 AM No comments:

To all you club house dub heads and fans in the spirt of deep Chicago house New York garage sound, check out this mix from the Thermal Soundwaves vault with all of your favorite classic tunes. Enjoy and dance dance dance ....... 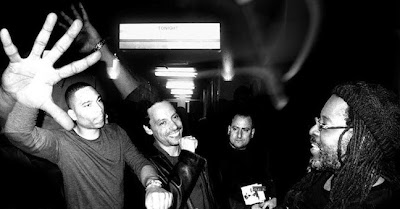