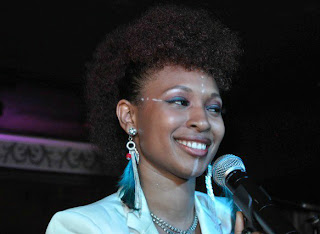 Maimouna “Mumu Fresh” Youssef is a seasoned Grammy nominated singer, songwriter, producer, and emcee. She received a Grammy nomination for her contribution on the 2007 Roots hit, “Don’t Feel Right”, in the category of best rap song. She has swapped musical licks with artists such as Angelique Kidjo, Common, Nas, Dead Prez, Wilco, Zap Mama, Cody Chesnutt, Martin Luther, Jill Scott, Erykah Badu, Mos Def, and Talib Kweli to name a few. As a collaborator and band member, Maimouna has rocked the stages of many renowned venues such as Denver Colorado’s Red Rocks Amphitheater, Switzerland’s Montreux Jazz Festival, New York City’s Legendary Carnegie Hall, and Radio City Music Hall. Youssef’s musical endeavors with Grammy Award winning producer James Poyser were
a springboard for her to make her big screen debut in Dave Chappelle’s hip hop documentary “Block Party.”After the birth of her son, she took a short hiatus from the music business. Now Maimouna has returned to both the stage and recording booth ready to share her music and energy with the world. She released her first solo EP entitled Black Magic Woman on March 1, 2011, which led her to headline two of Washington DC’s most prestigious venues, The Kennedy Center and The Carter Barron Amphitheater. In September 2011, she released her first full-length album entitled The Blooming, which received The Washington Post’s and The Washington City Paper’s votes for “Top 5 best albums released in 2011.” Later that year, she teamed up with her long-time friend Brian Kyle Atkins, who was one of Okay Player’s pioneering forces, and the personal videographer to rapper Common. Together they created the very first visual for her leading single, “I Got A Man” produced by the Hip Hop icon, Dj Jazzy Jeff. In November 2011, Maimouna was awarded the title of “Artist of The Year”, by the non-profit organization One Common Unity for her dedication and commitment to empowering underserved youth. She is also the musical director and lead vocalist of an acoustic trio “Three Generationz” that performs Native and African American songs and stories through folklore. Born into a family of exceptional artists, Maimouna began performing with her family as early as age five. As an adolescent and teenager, Maimouna toured with a Baltimore based social change musical theater group called Uprising as a lead vocalist and played a leading role in the off-Broadway musical “Once On This Island”. As a teenager, she co-founded and led the Hip Hop band Cirius B out of Baltimore, MD that helped draw the attention of many industry executives and producers. As an avid and dedicated fan of both hip hop and live music, Maimouna’s musical dreams began to take form when she was introduced to the legendary hip-hop band The Roots. The Roots recognized Maimouna’s raw talent and asked her to sing lead vocals on their hit single, “Don’t Feel Right”, off of the Game Theory album which earned her a Grammy nod and the opportunity to join The Roots on their world tour where she earned a name for herself as a world-class vocalist and began to emcee under the alias Mumu Fresh. Maimouna “Mumu Fresh” Youssef has experienced and accomplished a lot as an independent artist in her short 27 years. She’s most comfortable on the stage performing music that inspires her and in the recording booth writing and creating new music to inspire others. Maimouna “Mumu Fresh” Youssef is a rare talent with tremendous versatility as a songwriter, producer, vocalist and emcee with the ability to move seamlessly between genres. She is definitely not new to the stage or music industry but her work as an independent solo artist and activist has just begun. Long time fans and new fans alike excitedly digest each new edition to her musical catalog and eagerly anticipate the release of new music. Mumu Fresh is a star on the rise. Stay tuned...this is just the beginning!

Posted by The Indie Review at 1:40 AM