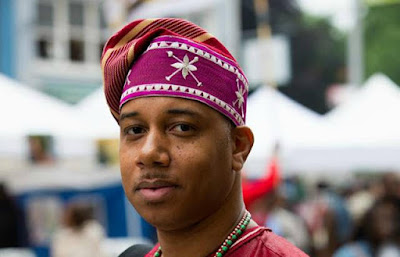 Chief Ayanda is an African American master percussionist, GRAMMY® Award-winning musician, arts educator, and lecturer. He’s been performing professionally since he was five and has performed or shared the stage with some of the world’s most revered percussionists and most loved artists, including the late Randy Weston, George Clinton, Erykah Badu, M’bemba Bangoura, and Somi. A glance at some of his performing credits in the United States include Carnegie Hall, Lincoln Center, Radio City Music Hall, Michael Jackson: 30th Anniversary Celebration at Madison Square Garden, The Late Show with David Letterman, Good Morning America, America’s Got Talent, the U.S. Open, Sesame Street, and many other places. He’s also recorded and licensed music that has been featured on FOX’s So You Think You Can Dance. In 2014, Chief Ayanda was a featured percussionist on the title track of Arturo O’Farrill and the Afro-Latin Jazz Orchestra’s major work, The Offense of the Drum. The project won a GRAMMY® Award that year: Best Latin Jazz Album. Chief Ayanda’s first public performance was as a small child when he played at the historic Brooklyn Academy of Music (BAM) with the International African-American Ballet. His father, Chief Baba Neil Clarke, the legendary jazz percussionist, was his first teacher.
Chief Ayanda has toured throughout North America, Africa, Asia, the Caribbean, Canada, and Europe several times over. His talents have led him to perform or record with Chief Bey, Orlando Rios, Randy Weston, Batoto Yetu, The Amistad Project, Alvin Ailey American Dance Theater, Forces of Nature, Asase Yaa African American Dance Theater, pop artist Jewel, and many others. Clarke’s research of the percussive arts (including a variety of drums and bells, the balafon, and the shekere) is exhaustive. His range spans several musical traditions, including those of Guinea, Mali, Senegal, Ghana, Nigeria, Angola, Cuba, Brazil, the Caribbean, and of African Americans. After more than thirty years of deep study, immersion, and training, he’s emerged as one of the most highly regarded percussionists of his generation, unique in his ability to cross every musical genre.
As a business owner who is passionate about community wellness and development, Chief Ayanda founded THE FADARA GROUP LLC. Its main offerings are True To Our Native Land, a cultural appreciation program and Integrated Wealth Alliance (IWA), a network of esteemed healers and practitioners from various disciplines. Clarke is also co-founder and musical director of Asase Yaa African American Dance Theater, the Bessie-nominated company of the Asase Yaa Cultural Arts Foundation. He is also a partner and musical director of Palms Down, Inc., a percussion ensemble. Through Palms Down, he’s performed and co-produced music that was licensed for Elysium, the feature film starring Matt Damon and Jodi Foster.
Clarke teaches public and private students (children and adults) throughout the New York Tri-State Area. He also lectures regularly on African culture and the percussive arts at national and local institutions, including at the American Museum of Natural History, Hofstra University, Yale University, Princeton University, and many other spaces. In 2016, sponsored by his mentor Chief Agbongbon Fakayode Faniyi, Ayanda Clarke was installed as a chief in Osogbo (Nigeria), presented as Chief Ayanda Ifadara Clarke, Ajibilu Awo of Osogbo. The ancient City of Osogbo is honored globally for its preservation of traditional African arts and culture. In 2005, it became a World Heritage Site landmarked by the United Nations Educational, Scientific and Cultural Organization (UNESCO).

Posted by The Indie Review at 4:52 PM