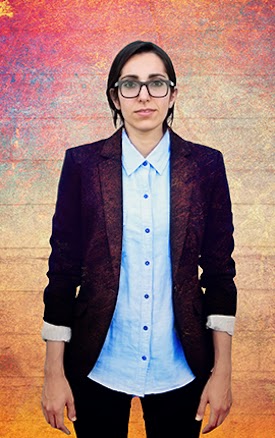 From the moment Chamuel made her television debut on season 4 of The Voice, the bespectacled singer from Massachusetts charmed audiences and pop stars alike with her soulful covers. While some may have leapt at the chance, Chamuel was initially wary of the realities (no pun intended) of submitting to a reality television show - though she soon found herself happily on team Usher and taking home 2nd place. “I went to the show looking for a teacher and it turned out Usher was looking for a student” says 28-year-old Chamuel. “I was craving the challenges and rewards of being part of a top musical community, and I found that on The Voice.”
By time she took The Voice stage in 2013, Chamuel had spent the better part of a decade fronting the seven-piece Michigan rock band, Ella Riot (formerly My Dear Disco). In the band, Chamuel cut her performer teeth touring around the country 200 days a year, releasing several albums, and learning to drive a tour bus that ran on waste vegetable oil. Eventually the fuel ran out, Ella Riot parted ways in 2012, and Chamuel returned to Massachusetts in search of home and solitude. From here, she began working on self-produced tracks under the moniker, The Reverb Junkie - “I wanted to create my own vision from start to finish,” says Chamuel. “The band was such a great collaborative experience, but when it was over, I realized I hadn't ever tried making music on my own or developing what that sounded like.”
For Chamuel, the drive to create music began with a feeling. From a young age, Chamuel would find herself taken by the emotion conveyed in a piece, and spent hours attempting to replicate the sound that induced that feeling. “For me, singing is about resonating,” says Chamuel. “If I feel an emotion in a song, I want to resonate it in my entire self - by singing.” The effect is songs like beacons, broadcasting the emotional frequency Chamuel effortlessly transmits.
Considering all the emotion contained within it, Face the Fire came together at a breakneck pace. For three weeks this past winter, Chamuel and her collaborators, Tyler Duncan and Theo Katzman - college pals and My Dear Disco band members - holed up in Chamuel’s home, building the album from musical nuggets each had brought to the sessions. The trio alchemizes several genres from across the history of music - spanning from 80s pop ("Rock It") and melodic house ("Weight of the World") to VHS-infused reggae ("Money").
The title track on the album is no exception - showcasing the convergence of Chamuel’s vision and her collaborators ingenuity.  "Face the Fire" serves as a sort of pulsing mission statement, a vamping call to action that Chamuel relates to her own experience in harnessing musical passion.  This track, which like the rest of the album was recorded and produced in Chamuel and Duncan’s home studios, features a tapestry of interlocking percussion, surf-punk bass tones, and a rousing call and answer between Chamuel and her choir.  “The imagery I get when singing the song is that I'm in front of a big, camp-like fire. There are people all around, and I’m not sure if they’re ghosts or strangers, but they chime in while I sing. It's almost a trance-like state - being pulled towards this fire. Everyone is being pulled towards it."
Chamuel's drive to create comes from her desire to provide a world for the listener to inhabit. “For as long as I can remember, I've been searching for the place where I feel an unequivocal sense of belonging. Music is that for me, as I know it is for many others, and it's my goal to bring music into the world that people can resonate with – where they feel at home.”

Posted by The Indie Review at 3:35 PM