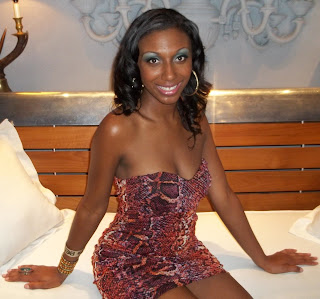 Bold, free and uncompromising; Collette represents a new breed of independent artistry. Driven by an insatiable curiosity and an unyielding appetite for personal evolution, the girl who left her birth home of South Carolina to tackle New York on a wing and a prayer has emerged as one of the Big Apple’s freshest young talents. With the release of her third project, Juneteenth Revolution, Collette arrives, through intricate yet intimate songs of life, love, and liberation she solidifies her industry position as the talent to watch. Her first full-length pop, funk and soul album since her 2008 debut, Experience Collette, represents a high-watermark for a multi-instrumentalist singer who has worked tirelessly to achieve the evident growth in her craft, a polish to her live performances, and the rewards of hard-earned critical acclaim. Unshackled from the drains of negativity, a renewed Collette reaches back to transparently share powerful testimonies of toil and triumph with fans and listeners to both encourage and restore. It’s only fitting that the Juneteenth holiday, also known as Emancipation Day, is also Collette’s birthday. The title of Collette’s latest, greatest inspiration is born from the idea of people seizing the freedoms they already have, much like the American slaves of the antebellum South. This red clay granddaughter of a once rare female saxophonist and the daughter of a gospel singer who regularly gigged with The O’Jays, Collette was born into a long bloodline of unconventional women trailblazing unique paths in music. After years of honing her own three-octave alto in the choir rafters and studying piano, baritone and alto saxophone, Collette was determined to give voice to the melodies and chords playing in her head. Whether taking a leadership position as marching band drum major or crooning jazz standards in school recitals, Collette was mastering the tools needed to be more than a cliché R&B diva, she was becoming a consummate, all-around artist with an ever-expanding palette of genres with which to paint. Late to blossom into her spritely beauty, the self-proclaimed awkward “art nerd” was unfettered by the need to be a “cool kid,” freeing her to explore her creative passions and embark on a journey of learning to be her most authentic self. By the time the Howard U. grad took off for NYC, she knew exactly who she was and what she wanted: to claim her own Juneteenth freedoms from the city of dreams that never sleep. With only a used car and no promise of proper housing, the Delta Sigma Theta sorority sister industriously made her way onto the City’s independent and mainstream music scenes. Writing and arranging her debut album following a romantic break-up, in 2008 Collette released her calling card, Experience Collette, inviting newcomers into her world and letting them know they were not alone in experiencing the vulnerabilities and hardships of love. Soon, the in-demand starlet was sharing stages and opening for such national artists as Chrisette Michelle, Talib Kweli, Eric Roberson, Rachelle Ferrell and Noel Gourdin. Soon Gap, Inc. took notice and contracted Collette to participate in their “Born to Play” performance series for the company’s 75th anniversary. Her single “You Don’t Know” found its way onto Music Choice and became a regional hit in her beloved Carolinas. Early star-turning performances in small productions of Regina Taylor’s Crowns and Tony Kushner’s Caroline or Change lent a humor and theatricality to her entertainment repertoire. Soon, BET/Centric TV was also spotlighting the independent artist that was making her mark as a live performer in urban markets from Atlanta, Georgia to Springfield, Massachusetts. Collette closed out her pre-Juneteenth run with CoCo By Request in 2010, an EP of covers including celebrated takes on Erykah Badu’s “Orange Moon” and Richard Smallwood’s “Angels,” that served as a love letter to listeners, fans who picked the songs Collette recorded and supported her Kickstarter campaign for the project that would evolve into Juneteenth Revolution. Sponsored by fans, penned by Collette, and produced by new talents like Okayplayer artist Danny Swain, Terry “20” Poindexter (Raheem DeVaughn, Jazmine Sullivan) and Aaron Hardin (Ebrahim, Kenny Wesley), among others, Juneteenth Revolution boasts duets with such esteemed artists as Monet, Eric Roberson, and Akil Dasan. Following the lead of such motivational influences like Jill Scott, Amel Larrieux, Mary J. Blige and the incomparable Bill Withers, Collette encourages her listeners to start a revolution first with themselves before raising the banner of social revolution.

Posted by The Indie Review at 2:15 PM