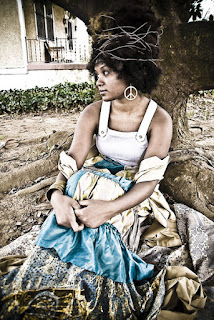 Born and raised in Washington, DC, the singer/songwriter Tamika Jones has finally come into her own. Growing up in poverty, Tamika turned to music as an escape from the harsh realities of drugs and violence that those around her so easily succumbed to. A young and timid Tamika, at the age of 11, was discovered when a classmate heard her singing a song so beautifully and ahead of her age and outed her to her teacher and classmates, who let her know that she could no longer keep her voice hidden. From then on, Miss Jones began singing everywhere she went. Singing in various gospel and jazz choirs in school and around the city and even directing her very own gospel ensemble at School Without Walls High School. Eventually, Tamika caught the attention of Grammy nominated producer and Bad Boy Hit Man Chucky Thompson, also a DC native. Chucky worked with Tamika for several years mentoring her on songwriting, recording and the music business, inviting her to work on projects with acclaimed artists like Faith Evans, Mya, Lil’ Kim, Tanya Blount, and Grammy winner, songwriter Denise Rich. Surrounded by so many successful artists, Tamika began searching for her own sound and place in the industry. With other musical influences such as Duke Ellington, Billie Holiday, Rachelle Farrell, Nina Simone, Sade, Karen Clark Sheard, and Jill Scott, she found that she was most at home with Jazz and Gospel. Also, her love affair with hip hop is what she found connected her to her peers and younger kids who she wanted her positive messages to reach and also gave her that street edge that is intrinsic of a girl surrounded by the ghetto. With one look into the eyes of Tamika Jones, you can see the love and passion she has for music and her people, and in her songs you can hear the pain, struggles and triumph that makes Tamika stand out like a rose emerging from the concrete. Finally, she is ready to walk her own path, as she shares her life, love, and passions in the only way she sees fit, through heart wrenching lyrics delivered in the most enchanting of melodic tones.

Posted by The Indie Review at 9:44 PM