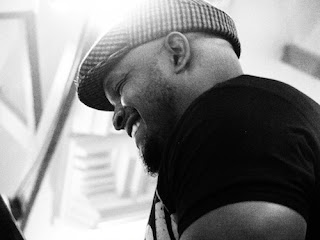 Born in The Island of Dominica (British West Indies), singer-songwriter, Heston grew up with music all around him. Being surrounded by reggae, pop, classical, soul, R&B, rock music was commonplace and it is no surprise that radio, along with a collection of his father’s old records, would open the key to his soul and love for all types of music. From Barbara Streisand to Aretha Franklin, The Bee Gees, Marvin Gaye, Elton John, Beres Hammond, Stevie Wonder and Michael Jackson (to name a few)  each musician looped a thread into his soul, and after listening to his music, it is clear that he has been influenced by the best. His voice rises and falls like ocean waves rolling over the white sands of his Dominica homeland. A guitar-welding troubadour whose tenor is as melodious as the island accent of his native tongue, Heston’s music soothes, cajoles, and ultimately envelopes listeners into a sensual atmosphere rich with whispered promises. On Warm Human, Cold World (World Soul Music/Dome), his third soul project in eight years, the Atlanta-based artist is unabashedly romantic, allowing listeners to enter his most intimate spaces and thoughts. Here, the shy, singing boy who once fearfully trembled behind his church’s podium is now revealed as a sure-footed, hot-blooded man clear about what he wants and how he plans to get it—be it his internationally respected music career or securing a passionate, solitary love. Warm Human, Cold World reminds us why we are here—to love. Based on two relationships experienced since his 2008 Storyteller (World Soul Music/Dome), Heston uses his solo pen, voice, and evolving self-production skills to capture the raw emotion he experienced and learned through those connections. From the first single, “Greatest Lover,” the singer/songwriter brings a universal honesty about relationships. Initially conceived as the usual break-up song, after a discussion with the song’s real-life subject, the “Greatest Lover” was transformed into an up-tempo celebration of a lover once present, now lost. Daring to reveal the arc of love, Heston delivers the fresh longing of being “Outside Your Window,” the bliss of being in it “For Love,” the “Crazy” complications of letting go, and ultimately the heartache of being “Lonely.” Recorded in a concentrated period, it is his most fluid, intimate project yet. With a career in music that began in Atlanta, GA, launched by a self-titled EP, he has defined his journey as a full-time musician, composer, songwriter and producer. “Creating timeless music has always been my ultimate goal,” says Heston with a poised yet humble demeanor.  “I want to leave the world with music that can be played for a lifetime.”

Posted by The Indie Review at 8:45 AM