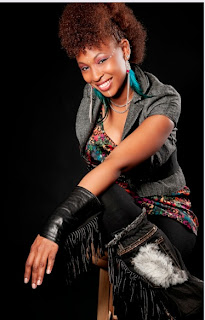 Maimouna “Mumu Fresh” Youssef is a Grammy nominated seasoned singer, emcee, songwriter and poet. She received a Grammy nomination for her contribution on the Roots hit “Don’t Feel Right” in 2007 for best rap song. She has swapped musical licks with such artists as Angelique Kidjo, Brian Wilson’s band, Big Daddy Kane, Nas, Dead Prez, Wilco, Zap Mama, Cody Chestnut, Martin Luther, Jill Scott, Erykah Badu, Mos Def, and Talib Kweli. Maimouna has also rocked the stages of many renowned venues such as Denver Colorado ‘s Red Rocks Amphitheater, New York City’s Radio City Music Hall, Switzerland’s Moniteau Jazz Festival, and The Carter Baron Amphitheater in Washington, DC. Her musical endeavors were a springboard for Youssef to make her big screen debut in Dave Chapelle’s hip hop documentary “Block Party.” Maimouna released her first Solo EP entitled Black Magic Woman March 1, 2011 and is currently working on her inaugural solo full length LP.
A Baltimore native born into a family of exceptional artists, Maimouna began performing traditional African and Native American songs on stage with her family at the age of 5. As a youth she joined the Baltimore/Washington based musical theater group called Uprising. Maimouna toured nationally with Uprising as a lead vocalist. In addition, the young Youssef played a leading role in the Broadway musical “Once on this Island”. Some of her other theatrical experiences include the original trio showcase “Three Generationz” that consisted of Maimouna Youssef, her mother, Nataska Hummingbird, and her grandmother, Mountain Eagle Woman (now deceased).  Maimouna still continues to perform with Three Generationz – now comprised of Maimouna, her mother and Navasha Daya of Fertile Ground.
At the tender age of 16 Maimouna formed the jazz/hip-hop/funk/ band along with her cousin Omari “AzIz” Forman-Bey known as Cirius B. In the spring of 2003 the duo completed the recording of their independent debut album entitled “Subversive Activity”. Also in 2003, Maimouna Youssef won the title of “Baltimore’s Idol” and began appearing frequently on Baltimore’s Fox 45 morning show as well as every major local radio station.  Cirius B’s unique sound found it’s way to Grammy Award winning producer James Poyser and in 2004, Maimouna and Omari relocated to Philadelphia to work with him.  Maimouna’s dreams began to materialize when she was introduced to many of her favorite and most respected artists including the legendary hip-hop band The Roots. The Roots recognized Maimouna’s raw talent and was asked to sing lead vocals on their new hit single at the time, “Don’t Feel Right.” Shortly thereafter, Maimouna was packing her bags to join the Roots on their world tour.  It was during this tour that Maimouna earned a name for herself as a world-class vocalist and emcee.