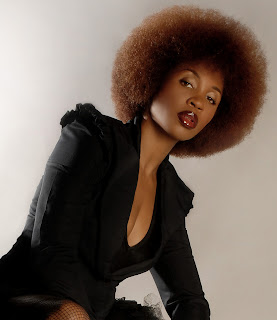 The daughter of strict Baptist ministers in Dallas, Texas – only two kinds of music were allowed in N’dambi’s house – gospel and country. Church was the center of the family’s life in every way and there was no middle ground. Secular music was forbidden, but its irresistible allure eventually trickled into her life and began impacting the maturing young singer. Blessed with a deep contralto, N’dambi became especially enamored with the male singers from the ‘70s and ‘80s she’d heard and identified with while hanging out with cousins and friends. The funky soul of Bar-Kays’ Larry Dodson, the sophisticated syncopation of Earth, Wind & Fire’s Maurice White and the notorious abandon of the Ohio Players’ Sugafoot influenced her heavily. Later, the mysterious, uninhibited imagination of Nina Simone and Mahalia Jackson also became musical and cultural touchstones. Her independent streak led to college and a degree in English and creative writing from SMU. Her developing, expressive voice, the poetic irony of her skillful writing ability and her musicianship as a classically trained pianist spurred N’dambi’s musical ambition. N’dambi sang back-up and collaborated with another rising soul seeker, Erykah Badu all the while honing her artistry and slowly building a fiercely loyal fan base that resonates with the organic, authentic approach to her life and music. N’dambi delivered her debut solo CD Little Lost Girl Blues in 1999. Since then she has released the two-disc set Tunin’ Up & Cosignin’, and the 2005 set A Weird Kind Of Wonderful, which was released only in Japan. On her latest Pink Elephant, N’dambi ingeniously distills soul-deep inspiration into a sensual style of elegance and power.
Posted by The Indie Review at 1:11 PM