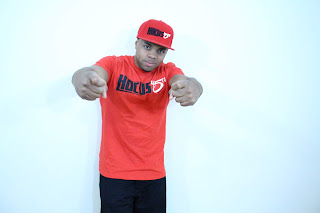 Hasan Harris a.k.a Hocus 45th was born in Harlem and raised in the Bronx. Some would argue that hip-hop was born in the Bronx; which would explain Hocus’ love affair that started at the early age of 8. Introduced to the art by his father, Hocus 45th use to rap to his father who told him that he was going to make it big one day. Tragically, his father who was his hero, mentor and best friend died from a heart attack when Hocus was only 12-years-old; leaving behind 8 sons and 2 daughters. Devastated by his father’s death, but still dedicated to the art form, Hocus 45th hit the streets looking for that connection he once shared with his dad.
Unfortunately, as with many fatherless young boys, the streets got to him first. As a young teen, Hocus 45th started to sell drugs (crack cocaine) in the ‘hood. And when he was 17, he joined a gang known as SEX MONEY MURDER, a subset of the Bloods, which would later haunt him in ways he could not have imagined. While doing his thing in the streets, Hocus 45th caught a couple of court cases ranging from attempted murder, direct sales and gun possession. Luckily for him, he either found his way around those charges or ended up doing little jail time. Through all the hustling and gang banging, Hocus 45th never gave up his passion for music; the music he once shared with his best friend, his father. When he wasn’t dealing drugs, he would join cyphers in the streets and perfect his skills. By know he was getting noticed for his flow. In 2008, along with his friend P.O., they started a movement called Bang Bang Boogie which consisted of rappers Cuban Link, Lord Tariq, Mysonne, his brother S-1 and himself. Heavily cosigned by hip-hop giant 50 cent and promoted by G-Unit, the movement was on its’ way to success!
Finally, Hocus 45th decided to leave the streets alone and focus on his passion for music; he wanted to make his dad proud. But little did he know his past would catch up with him. Hocus and his rap crew, Bang Bang Boogie, were featured in the August 26th, 2017 issue of the billboard magazine. Things was seeming on the up and up but a little over a week later the Bronx district attorney office would come back with a secret indictment arresting Hocus, 2 of his brothers and 22 others on conspiracy and related charges. Headlines read "Kings dethroned, castle hill gang busted on drugs and murder".
After being incarcerated for 4 long years on Rikers island, facing life in prison, Hocus 45th would finally have his day in court. The trial lasted 2 long months but, in the end, Hocus 45th was acquitted on December 12, 2012 (12/12/12), found NOT GUILTY on all charges (8) by a jury of his peers. After the acquittal, he decided to leave the streets behind and once again pursue his passion for music. While in jail he found a new love. He began to read books on health and nutrition and decided to become a vegan. Hocus now go to schools and group homes to talk to kids and troubled youth about health, gang violence and his life, in hopes that his testimony will be an example to them. His goal is to encourage them to not make the choices he once made in his past and encourage them to always strive for greatness and pursue their passion.
Hocus 45th  over has recorded over 200 songs and has collaborated with the likes of DMX, Styles P, Fred the Godson, Vado, AR AB and many more. From being in a jail cell facing life in prison to opening up for DMX at his concerts, it's safe to say that this man’s father was right, Hocus 45th is going to be big.
Hocus 45th’s debut, full-length album will drop early 2019. Look out for two new mix CD’s to be released later this year.

Posted by The Indie Review at 2:11 PM