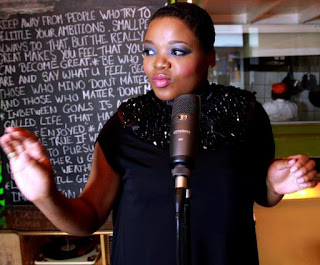 Yves hails from a small town in the Eastern Cape called Butterworth also known as Gcuwa. Yves found her calling in music at the tender age of 13 where she was a lead vocalist in a local band which entered the Shell Road to Fame Talent competition in 1996 and successfully made 2nd place in the regional finals Yves continued to pursue her passion and went on to study and major in music at the National School of Arts. In 2004 Yves talent was recognized by one of the finest music producers in the country Jerah Mothusi and gave her the opportunity to showcase her voice by working with her on Rude Boy Paul’s Azaniah Pulse 2 compilation which featured the late great Mama Busi Mhlongo and many more remarkable artists in South Africa. As a young artist eager to establish herself and gain recognition in the music industry, Yves entered Idols and impressively made it into the top 32 in the country. Her talent, ambition, commitment and passion have led to one of Yves major achievements where she collaborated with Molhusi again to release her debut album titled “7ven.” The album is a lyrically powerful work of art which reflects on some of Yves’ life experiences, allowing her to showcase her song writing skills. She got to co-write with artist Fiesta Black and international DJ/Producer Harrison Crump on some of the songs on the album. Yves released a single “Mfana waseMahlkeng” along with a music video playing all over radios and television. She has also been entered for the 2015 SAMA’s. Her immense talent is sure to take the international market by storm and prove that she is one of the best vocalist on the music scene.  Yves has also been featured on SABC’s Morning Live, the Daily Sun, SkyroomLive, and Hectic 99.
Posted by The Indie Review at 10:59 AM