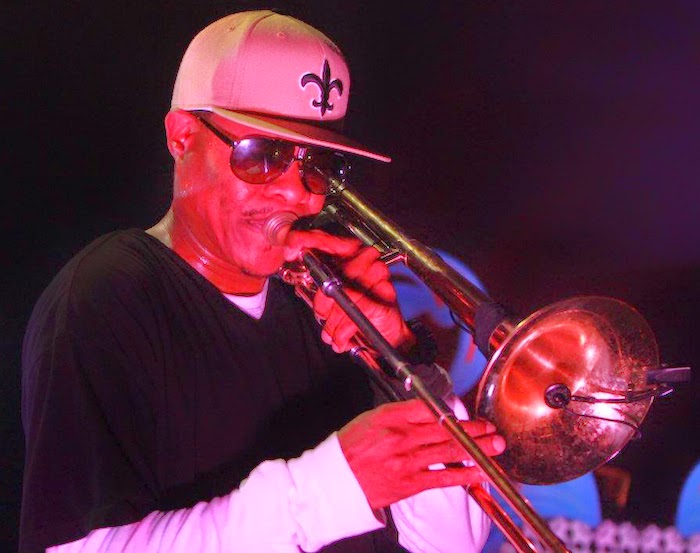 Henry himself is perhaps best recognized around the world as the sweet toned trombonist featured in the Rebirth Brass Band, Galactic, and trumpeter Kermit Ruffins’ band, The Barbecue Swingers.  He has also recorded and played with the Dirty Dozen, Treme and New Birth Brass Bands. He has imparted his fiery melodies on stages everywhere from New Orleans neighborhood barrooms to far away festivals before hundreds of thousands in Canada, Japan Australia, Brazil, Hungary, Spain and Thailand and command performances for the ambassadors of Senegal, Morocco, Egypt and Kuwait.
Long before teaming up with any these vanguard ensembles however, Henry, now 36, had been leading his own band for over twenty years.   Like so many other eager young musicians in the Crescent City, he hung around older musicians to build his skills and develop his style.  In 1985, the legendary musician, Anthony “Tuba Fats” Lacen, encouraged the 10-year-old prodigy, suggesting he put a band together.  The Lil’ Rascals Brass Band has been together now for 26 years, still challenging second liners and rival bands with its hot beats.  The ensemble has released two fine, very diverse albums.  In 1998, they demonstrated their respect for traditional brass band music on We Shall Walk Through the Streets of the City  which includes such classic numbers as “Paul Barbarin’s Second Line.” And in 2001 they released Buck It Like a Horse, a disc filled with sizzling original material, redefining a new era of brass band music.  Since 2008, Henry has been touring with Galactic and has recorded 3 albums with them.In 2011, Henry started a new venture, establishing the Treme Funktet. It’s a funky sextet that’s comfortable moving from jazz to R&B and hip-hop, with an occasional visit to the second-line brass band style.  “I wanted to explore something different—do some of my own material and share some of my own ideas,” Henry says of the freedoms offered by Treme Funktet. In 2012, Henry is a Grammy Winner with the Rebirth Brass Band for the album Rebirth of New Orleans in the Best Regional Roots Category.  Now working on his solo album, Corey Henry plans to pay tribute to all the veteran New Orleans musicians from whom he learned his craft, absorbing all they had to offer.  As a kid, he’d spend hours listening to trombonists like Trummy Young, J.J. Johnson, Al Grey and Jack Teagarden.  He hails Fred Wesley as being especially influential to his musical approach.  But no matter their style, these masters remain with Henry contributing to his wonderfully uncommon sophistication and tone.
Posted by The Indie Review at 10:13 PM