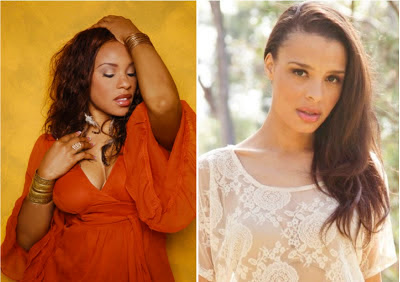 As an R&B artist, Lina's sound crosses several music genres including Jazz, Soul, Hip-hop, Gospel and Pop. A lyricist, Lina's depth puts you in the mind of Lauren Hill or Mos Def. A musician's musician, who sings in eight languages, Lina writes all of her songs, and her delivery is sometimes reminiscent of the great Billie Holiday. Her artsy, funky style reminds you of Erykah Badu or Jill Scott. Her out-of-the-box-hard-to-label persona is on the level of a Macy Gray. In spite of all of those comparisons, she’s an original. Her sound is fresh and in its own lane. . In 1998, Lina got her first big break as a songwriter by penning a tune for Tyrese's self-titled debut album. Lina proved herself to also be a solid songwriter, penning "Ain't Nothing Like a Jones" for Tyrese.
Lina's Stranger On Earth debut was released in 2001. The critically acclaimed album was named as one of "2001's Top 10 albums of the year" by Billboard magazine. The album turned out the US hit, “It’s Alright” and the hip-hoperatic UK hit, “Playa No More” plus “I’m Not The Enemy” which was featured in the 20th Century Fox Film, High Crimes. Critics praised the disc's bold theme, a syncopation of music past and present: with its combination of classic and modern sounds. Lina's sophomore album The Inner Beauty Movement was released on Hidden Beach/Moodstar/Universal in 2005 and produced such hits as "Smooth", the steppers anthem and "Leaving You." With rave reviews from UK’s The Sunday Times and Vibe Magazine, The Inner Beauty Movement showed Lina’s fans that she was committed to creating consistently good music.

Antonique is following the career path of Barbra Streisand, Diana Ross and Whitney Houston; pursuing a career in film while also continuing to make her dream of a Grammy-winning recording career into the most amazing of realities. Surprisingly, her love for Whitney would translate into a voice of her own. Therefore, it’s no shock that two of Smith’s most famous roles centered on music. She brought R&B songstress Faith Evans to the big screen in 2009’s Notorious. She conquered the role of Mimi Márquez in the iconic Broadway musical, Rent. But for Antonique’s next venture, the exotic beauty, isn’t playing a character; she is exposing her heart and soul in a ten-track album that she co-wrote. Versus co-opting a manufactured image from a music label, the New Jersey native is maintaining control over her sound and bringing supporters along for the ride. Through Kickstarter, fans can invest in the album with a donation of their choice and join the creative process. “We are putting the power in the hands of the people. It’s not a label saying, ‘This is what people are going to like,’” stresses Antonique. “It’s the people saying, ‘We are going to get behind this.’ We’re going grassroots!”  Antonique played CIA agent Sandra Burns in Abduction opposite Taylor Lautner and Alfred Molina and will be in theaters in late 2012 in Yelling To The Sky", playing the starring role of Ola O'Hara, opposite Zoe Kravitz and Gabourey Sidibe.
Antonique had a featured role in the Golden Globe nominated "Across The Universe" and has also guest starred on numerous hit TV shows including Law & Order and HBO's Bored To Death and the Sidney Lumet directed "100 Centre Street".

ANTONIQUE
Posted by The Indie Review at 10:27 PM