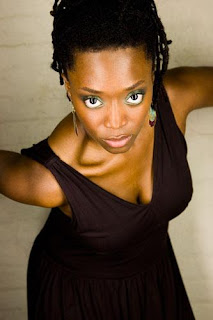 Candice Anitra hates how social constructs put people in boxes, including rigidly corrugated musical categories. Embodying the subtle rapture of Joan Armatrading, the robust confidence of Meshell Ndegeocello, and the thespian gender inquisition of Cheryl Dunye, the left-of-soul singer-songwriter bucks convention rather than live as a square peg in a round hole. Hailing from Philadelphia, the Brooklyn-based songstress was reared in a musical family whose voices were limited to home and church. When the adolescent impetus to find her own voice struck, she was stifled by her father’s telling her she “wasn’t ready.”
After high school, Candice set sail for New York University’s heralded Tisch School of the Arts. There, she discovered her vocal prowess upon receiving accolades for her performance in dramatic roles that called for her to sing. By 2006, a post-collegiate Candice had written a stage play, instructed a youth theater workshop, and assumed lead vocal duties for a local NYC band. Though the band dissolved, former classmates Ion & Sanford, who as Force Theory Productions scored award-winning films Favela Rising and Jesus Camp, gave Candice some music to write to – her entry into songwriting – and jumped to produce Candice’s maiden solo musical voyage, the 2008 EP Easier.
During the tracking of Easier at his Studio G, Joel Hamilton (Soulive, Matisyahu, Blakroc, Talib Kweli, Nina Simone) swooned over Candice’s single, “Objectify,” and he readily signed on to helm Candice’s 2010 full-length debut, Bark Then Bite, a critically acclaimed odyssey of dynamic sound and talent. The album included a royal remix of “Objectify” from producer Scotty Hard, a track that flips the script on Candice’s feeling degraded by men’s lewd behavior towards her on city streets, and the video for which plays with the concept of gender roles and has become a controversial conversation piece garnering thousands of views.
Most recently, Candice has headed back to Studio G with Hamilton to record her remarkable sophomore effort, Big Tree. Backed by an acoustic guitar loop and earthy bass line, Candice uses the title track to highlight the parallels between the human being and one of nature’s most sturdy species of flora. The supercharged lead single “Love Sick” probes the media’s influences on youth sexualization, while the tender a cappella ballad “I Hear Music” is a breathtaking ode to the enchanting musicality of a lover’s voice. Collectively and individually, the tracks on Big Tree are a mellifluous yet audacious blend of the delicious oft overlooked spaces between the genres. Taking the emotional bumps in the road and sewing a thread of commonality through them using euphonic bits of this and that is a sacred pastiche art that Candice Anitra has mastered simply by looking within.

Posted by The Indie Review at 6:20 PM